Synopsis: A Bullet for the Cartel

Nate Harver, private investigator, is finally living the good life, chasing down insurance fraud and reveling in all the wonderful things Portland, Oregon has to offer. Except, he’s bored and estranged from the woman he loves. His mentor and business partner, Donnie Shepard, is contemplating permanent retirement in the Caribbean. His other business partner, Orlando, has returned to Amber Waves, a group of mercenaries embroiled in a dispute in the Middle East.

While Nate is helping an old friend locate the thieves breaking into an auto repair shop, a massacre is starting south of the border. The leader of a Mexican drug cartel has found a traitor in his organization. The violence spreads quickly north and engulfs Nate in a wave of terror he never imagined possible.

Dispatched by the cartel, hired assassins descend on the City of Roses. They have been ordered to locate and eliminate the only surviving family member of the traitor. The target’s last hope of escaping torture and death may be Nate and Donnie.

The target is in FBI custody and hiding in Portland. The threat is compounded by a leak to the cartel from within the FBI. What appears to be the initial attempt by the assassins is thwarted only by Nate’s chance intervention. As Nate and the target form a bond stronger than the horrors they face, the mayhem reaches a violent crescendo.
Nate learns, perhaps too late, that things are not always what they are perceived to be, and that a friend can also be the enemy.

Facing the cartel and their own personal terrors, Nate and Donnie go on a ruthless offensive. The body count climbs as the suspense builds from the Pacific Northwest, through the Caribbean and Venezuela, and ending with an explosive climax in the Gulf of California. 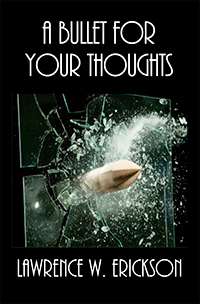 A Bullet for Your Thoughts

A Vietnamese hitman has come to the City of Roses. His kill is easy, but there’s a problem. The victim was a client of Portland Private Investigator Nate Harver. What should have been a quick in and out job just got complicated.

Harver likes to spend his days in Portland, Oregon chasing down Insurance fraud for Lumberjack Mutual and checking out the new food carts and brew pubs. Occasionally he takes on new clients to help pay the bills or for a change of pace. Now, the police have found his newest client, a software executive, floating face down in the Willamette River. When Harver begins to believe that what the authorities are calling a suicide drowning is really a murder, the hitman tightens the cross hairs on Harver.

Staying one step ahead of bullets, car bombs and a killer who likes to use a hatchet is turning into a full time job for Harver. Soon the bodies of his friends and business associates are piling up like fire wood. Harver discovers his dead client was involved in high tech industrial espionage and mixed up with a vicious gang of Asian criminals. Teaming up with his ex-partner, Donnie Shepard, Harver goes on the offense. His chance of survival is rapidly going from slim to none and every decision he makes turns deadly.

American greed and international criminals mix together to turn the quiet neighborhoods of Portland into war zones. Harver and Shepard will risk all when they come face to face with the unstoppable killer. 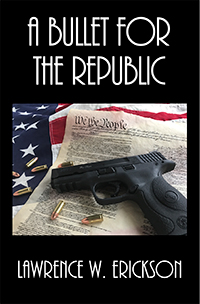 A Bullet for the Republic

Nate Harver, Portland Private Investigator, is recovering from physical and emotional wounds resulting from his run in with a deadly Vietnamese Hitman. His love life is in ruins, but his bank account is over flowing, both thanks to his efforts in rescuing a software firm from industrial espionage.

Just when he thinks life is returning to normal and he can go back to chasing down insurance fraud, along comes a beautiful heiress asking him to find out why a billion dollars of her fortune has disappeared into the coffers of Beltland, a neocon religious organization. When Nate stirs the murky waters of the evangelical political right, his client suddenly dies in a suspicious car accident and he becomes the target of a team of killers.

Nate’s attempts to fend off a gang of fascist skin heads and an East African assassin lead him to a killing ground in Las Vegas and ultimately, to a wealthy enclave on Long Island. When the woman he loves is kidnapped, Nate discovers he is capable of actions that equally match the viciousness of his pursuers.

Bullets fly and blood flows from the Pacific Northwest to the East Coast. Nate and his partners, Donnie Shepard and Orlando face their greatest fears and deadliest foes as Beltland orchestrates a violent lunge for world power.

Lawrence Erickson is a native of Kansas City, Missouri. He is a graduate of Central Missouri State College and served in the US Army. After spending over 40 years in the construction and nuclear power industries he retired to the Pacific Northwest. He has lived and worked in Germany, Scotland, England, Australia, Sweden, France, Saudi Arabia, Dubai, Singapore, Indonesia, Japan, Chicago and Boston. A Bullet For The Cartel is his third novel in the Nate Harver, Private Investigator, series. Lawrence and his wife Kate currently live in (and love) Portland, Oregon.

The first books I remember picking up and was then unable to put back down were the Victor Appleton II stories about Tom Swift Jr. These were science fiction tales with titles like Tom Swift And His Atomic Earth Blaster. Appleton didn’t exactly exist. The stories were outlined by Harriet Stratemeyer Adams (of Nancy Drew and The Hardy Boys fame). The writer was usually James Duncan Lawrence. Critics at the time raved about the “crudity of prose, construction, character and ideas.” At the time I didn’t know what a critic was, and I loved the books.

About the time I started Junior High, I discovered Edgar Rice Burroughs. Tarzan was the least of his fabulous creations. The Mars, Venus, Pellucidar and Moon books blew me away.

With puberty came the great Ian Fleming with James Bond. Ian and James kept me busy through my early teenage years. A double benefit to Fleming’s books came about when Playboy magazine started serializing the new Bond adventures.

I remember the last year of high school, and then college, tying me down to the classics. These probably helped me more than I’ll ever admit. I did find time back then to get a good dose of Norman Mailer and Ayn Rand.

Along came the Vietnam War and the US Army. They were accompanied by John D. McDonald and Travis McGee the “knight-errant”. Boy, did the lights go on with John D. McDonald. I was twenty-one and knew right then and there that I wanted to write like this guy. The books were a great way to escape from the circumstances in which I found myself. It would only take fifty more years for me pick up a pen or start typing on my keyboard. Today, I still get a chill up my spine when I see a copy of The Girl In The Plain Brown Wrapper.

Love, marriage, children and a good paying job were followed by Robert B. Parker and his pals Spencer and Hawk. This was my introduction to a hero with ethics who needed a partner capable of anything. Robert Crais came along a bit later with Elvis Cole and Joe Pike. Parker and all of his characters have stuck with me for the last forty years. His A Catskill Eagle may be the best thing he wrote. He struck me dumb with his quote from Melville,

“And there is a Catskill Eagle in some souls that can alike dive down into the blackest gorges, and soar out of them again and become invisible in the sunny spaces. And even if he forever flies within the gorge, that gorge is in the mountains; so that even in his lowest swoop the mountain eagle is still higher than other birds upon the plain, even though they soar.”

Wow, this said it all for the hero I wanted to write about. Thank God for Robert B. Parker.

WHAT THE AUTHOR LIKES TO READ

What follows is a list of other men and women who have brought me great joy over the years whenever I picked up something they wrote:

There must be several more authors that inspired me that I have failed to list. These are the ones that come to mind most readily.